Excuses Excuses Excuses I was at a dog fun day event recently where I overheard a mother and son reading a sign I had outside my stall. The woman was reading the list of symptoms on the sign out loud and when she had finished she said to her son “our dog has most of...

END_OF_DOCUMENT_TOKEN_TO_BE_REPLACED 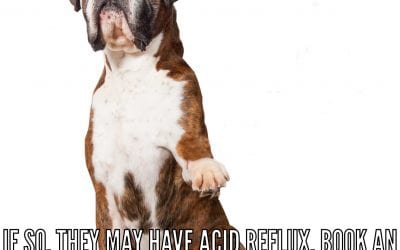 Does Your Dog Have Acid Reflux?

Watch how we achieve great results

Paul has treated my Boxers on several occasions. As a Senior Veterinary Nurse I am very aware of the limited options for treating, “puppy accidents”, “intermittent lameness” or “dogs just being dogs”.

Paul has successfully remedied minor structural indiscrepancies from time to time, and this is most noticeable and important to a “show handler” when dogs regain their free comfortable movement in the ring, or cease resistance on the stack because of these minor ailments being remedied.

I would have no hesitation in recommending his treatment to fellow dog owners. He has a genuine passion for animals and maintains professionalism and kindness at all times. Although his therapy is non-invasive, it is amazing to watch the animal’s response, trust and relaxation during the treatment.

I have known Paul Hellings since mid 2001. His work has been invaluable on a number of occasions. One in particular is that of a very social horse who unfortunately in her last season of Polo, with an inexperienced rider, sustained injury to both her front suspensory ligaments. Her fetlocks, especially her left, was almost parallel to the ground. She spent a lot of time sitting down and for her to get upon all fours, appeared extremely painful and distressing for us to watch. Her walk was more like a shuffle.

We had her on pain relief from the vet and knew long term this was not the answer. The Vet’s prognosis was poor – in fact, no future at all. On Paul’s first visit he spent time to communicate with her, and to earn her trust, before doing a series of techniques to help realign her spine and legs.

Paul also checked her digestive status – we found her to be sensitive to one of the feeds and adjusted this to suit her, which helped in maintaining her small frame.

She started to walk in a normal manner, though slow, after Paul’s first visit. She has continued to improve, and as we got past the crucial time, we changed her christian louboutin milano pain relief to a natural substance, which she still has a few days a week.
We continued regular treatments with Paul and will do so in the future as, while the right fetlock came up reasonably well, her left remains low, she benefits from Paul’s treatment.

Today she walks freely despite being low on the left front leg. She has a trot, canter and gallop at times with her mates and has even been known to kick up her back legs.

We are grateful to Paul for giving her back quality of life, and for ourselves, the privilege of having her with us.

Another area Paul has been very helpful in, is myself. I have suffered headaches often for several years. He did a technique to my head and neck, this corrected the dehydration I didn’t even think I had, as I would always be having adequate amounts of water.

Paul is a very approachable person, a good listener and is professional in the work he is obviously gifted at.

I first met Paul in early 2001. I had a sprained ankle which was not healing so asked if he could do anything. During the consult I mentioned I had a dog with low thyroid levels and was also low thyroid myself having been on Thyroxine for about 4 years. Paul treated my ankle and my thyroid. The following day I had an unusual reaction when I took the Thyroxine so I stopped taking it. Since then I have had my thyroid levels checked either six or twelve monthly and they continued to increase and are now stable at a normal level. The original diagnosis was that I would need medication for the rest of my life and the doctor cannot explain why I have improved.

As my treatment was successful I allowed Paul to treat my hypothyroid dog and he showed signs of improvement in a very short time. At that time I also had Paul check my other three dogs. He found and treated sore hips and feet caused by rough play (they are Bearded Collies). One dog had also been crippled by an autoimmune polyarthritis and veterinary treatment with steroids had only been short lived. She had been treated by a homeopath but was still very quiet and reluctant to move about. Paul examined her and said the cause was probably her booster vaccination (symptoms had presented about a month after her first booster at 15months old) and did a cleansing. The effect was quite dramatic and she rapidly returned to being a bouncy energetic Beardie which has continued to this day.

Since that year I have had various treatments of my dogs – mainly related to injuries from rough play involving backs, hips, neck and feet. On one occasion a dog was not moving freely and we were at a dog show. A treatment followed by Arnica and rest overnight, and then the next day the dog was bouncing around and showed very well. My dogs all now have an annual visit with Paul and any treatment required done on the spot. I have a young Lhasa and as a puppy she fell off her trolley and hurt her back and was limping badly. A treatment by Paul, and within minutes she was running freely. Since then she has had a hormone balancing as she was not coming into season properly. She is now normal in that regard. Apart from a dental extraction on one, and an inguinal hernia repair on another, only one dog has visited a vet in the last four years and that was an elderly dog who suddenly took ill. The vets disadvised steroids but there was no real diagnosis. Paul did examine him and tried several treatments which were effective in the short term. Unfortunately the dog died and the post mortem showed a rare cancer of the lung which I have been told can only be diagnosed at post mortem.

For myself Paul has treated me for a variety of problems related to cardiac function and systemic candida infection. These have all been effective.

I have great faith in his methods and have observed him treat a variety of dogs for a variety of ailments. The best recommendation I can give is that my dogs just love him and happily greet him whenever they meet. They tell him by their behaviour what is wrong and reward him with kisses when the treatment is over (they are Beardies after all who hug and kiss those they love). I have not seen them to do this with anyone else.

I have a 29yo horse Sam who is quite stiff in the back end, and generally just looks old and tired. I’ve tried a lot of things just to keep him going – Osteo, Chiro, Bowen, Equine Touch, Acupuncture. All have had instant results which lasted maybe a week. After a very good review from a friend I decided to give Paul a try.

Well, he fixed things I didn’t even know were wrong! My horse had a twisted rib cage causing many issues, as well as this we found he is intolerant of chemicals and could do with a good detox, plus a lot of little things which all added up to making him one tired old boy.

After Paul’s treatment, Sam’s spine was straight (it used to be banana-shaped) and he stood SQUARE for the first time in the 12 years I’ve owned him! He also had the sparkle back in his eye.

And when I rode him after his treatment I was blown away at how smooth he cantered. In all the years of owning him he has never cantered that beautifully. If only I’d known of Paul back in our showing days!

Anyway, 4 months later, Sam has the shiniest coat he has had in years, he is moulting more than usual (thanks to his new-found blood circulation, I assume). He is holding his weight nicely, he literally is standing taller – the dip in has back has decreased hugely – and he STILL stands square. I’m blown away and would (and do) highly recommend Paul as a first resort instead of a last!! Money well spent for sure.

Thank you so much Paul, you know how much Sammy means to me, and to see him happy just makes my day

Get a free Symptom List & See what we treat

Can’t figure out what’s wrong with your animal? Fill out the contact form and we’ll send you a list of symptoms to watch out for, and how we can help with those issues.